Dolphin, mahi mahi (Hawaiian for strong), dorado, or the scientific name Coryphaena hippurus is a popular sport fish caught in the oceanic waters of  Key West, Florida, throughout the year.    The fish tend to be more active March through June and can generally be found from just outside the reef to 1000 ft. of water offshore.  They are good eating fish and many restaurants in the Key West area will cook your catch.  Dolphin are also one of our most popular trophy catches for mounts.  Your captain can assist you with having your catch mounted and shipped to your home.

Dolphin lingo is common among fisherman. “Chicken” dolphin range from 20 inches from the

fork to “schoolie”  size dolphin of 4 to 6 lbs. — the size when you can tell male from female.

Females (cows)  have a rounded streamlined  head while males (bulls) have a blunt, squared

head.  Dolphin are illegal to harvest under 20 inches fork length and are generally referred to as

Searching  for Dolphin – As the Gulfstream waters tend to move closer to Key West, so do sargassum weed lines which provide a habitat for protection and feeding.  Cow dolphin (females) will not only lay their roe in weeds but will also hide under the weeds for protection from a blue marlin or sailfish looking to feed on them for dinner.  Dolphin will also feed on their own.  Many a mate has gutted a 20+lb. dolphin only to find a chicken (small dolphin)  inside the dolphin’s stomach. Schools of dolphin also like to swim under debris floating in the water.  Wood, tree trunks, buckets, rope, etc. provide sanctuary for smaller fish which attract larger fish.  Many  20+lb dolphin have been caught with a billfish scar embedded across their head. When searching for dolphin, also keep a lookout for frigate birds diving in the water.  dolphin and other species will chase flying fish into the air.  The frigate will swoop down to catch the flying fish.  The frigate bird has keen vision, so the higher up in the air he is, the deeper down the fish are.  A down rigger or deep troll can also help to enhance your catch.  When hooking dolphin down deep, the school will generally follow the hooked  fish up to the surface.  Leaving a schoolie or chicken dolphin in the water will encourage the school to stay near the boat for standup light tackle fun and enjoyment.  An interesting note, dolphin have even been caught on the the reef.  Many head boats or party boats have returned to the dock with dolphin in their catch.

The Tackle – Dolphin can be very  fast and aggressive  and that affects how a captain with regulate the trolling speed.  Both skipping and swimming ballyhoo will excite dolphin, as well as other species, like marlin, wahoo and tuna, that may also be around the area.  Soft head lures with or without dead bait may also entice the dolphin. Monofilament leaders are generally used but be aware of the wahoo strike that can cut the leader.  Some captains will attach a six inch piece of wire from the hook to the mono leader in anticipation of a wahoo strike during  dolphin fishing. Pitching live baits with plug or casting with spinning tackle are other popular techniques for catching dolphin.  This can be tricky with the specialized tackle and your best bet is to hire a professional to first see how its done. Dolphin can be caught on a variety of tackle from 12lb. to 50 lb. test.  Choice of line will vary according to the type of rod and angling skill of the individual.  The captains and crew at Garrison Bight’s Charter Boat Row are adept at teaching and instructing you on skillfully catching and landing your big catch of the day. 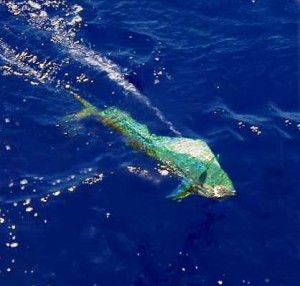 Dolphin swimming in the water

Choosing a Key West charter boat – Charter Boat Row has more than 30 boats available for all types and species of fishing.  We highly encourage you to  experience all our fishing from head (party) boats to center console open fisherman boats to offshore deep sea fishing boats.  Almost every boat can fish for all the different species that we have.  So, when chartering a professional fishing boat for the colorful, acrobatic dolphin, don’t be surprised if you are bestowed an extra added bonus of seeing and/or catching an equally challenging desireable species of blue or white marlin, sailfish, wahoo or tuna.

For information on other fish you’ll catch in Key West: click here.